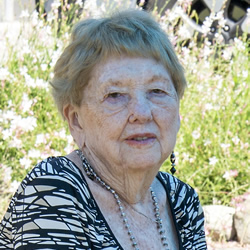 It is with profound sadness that we share with you the news that Monica Stafford, wife of our beloved WW II Veteran Ed Stafford, passed away on Thursday April 8 after a month of declining health. Monica was a constant but quiet presence at Ed’s side while he took centre stage with his bubbly personality. They were married after Ed’s return from the War and this year would have celebrated their 63rd anniversary and she had also marked her 93rd birthday in February. Many of us will also remember Monica’s last public appearance at Ed’s special Warriors’ Day Parade back in August.

To Ed, Jackie and all of the extended Stafford family, the GGHG Association Executive would like to extend its most sincere condolences on behalf of our membership.