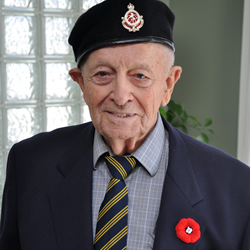 Sadly, we have just learned that the ranks of our WW II Veterans have further declined with the passing of Sergeant William George “Bill” Murray Sr., on August 8, 2022 in Collingwood Ontario at the age of ninety-nine.

He would tell you that he died of old age.

He would tell you that he was born on July 28, 1923, and on the kitchen table at 263 Glebholme Blvd, Toronto to William George and Blanche Arbelene (Seibert).

Bill joined the Governor General’s Horse Guards in 1938, at the age of 15 years and served until 1945 in England, North Africa, Italy, Belgium, the Netherlands and returned to Canada at the end of the War. After returning home, he joined the OPP in 1945 and was posted to McKenzie Island, Red Lake and then to Favourable Lake where he met the love of his life, a pretty, little nurse – Irene Manchul.

Bill and Irene were married in Dryden in 1948 and with the OPP were relocated to Ignace, Dryden and South Porcupine [Timmins]. Bill was transferred to General Headquarters in Toronto where he served as Staff Superintendent until his retirement in 1978.

He was Past Master of the Timmins Masonic Lodge and a proud member of the Royal Canadian Legion, GGHG and the OPP Associations.

Bill and Irene made Collingwood their home in 1988 and remained inseparable for 72 years until her passing on Valentine’s Day 2020.

He is survived by his daughter, Olive Irene (Mardi) Bourgard and son, William George (Bill Jr.) and to them, and the extended Murray family, we send our deepest condolences and our gratitude for his service to Canada and the Regiment.