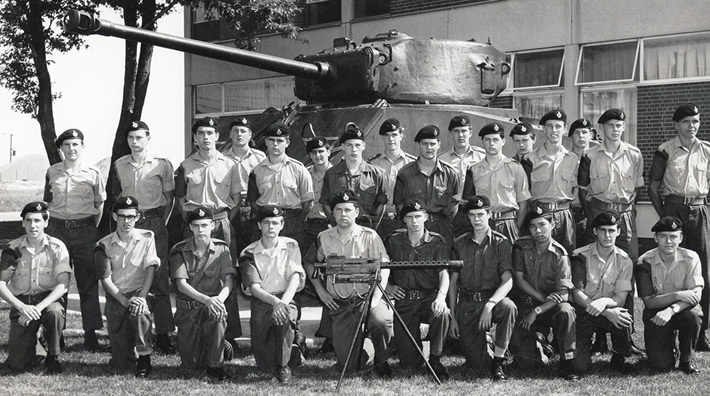 I believe this picture was taken in August 1970, and I am the guy in the front row, 4th from the right, at the M/G muzzle.

The CDN Gov’t ran a summer program where they enlisted large groups of students at different armories. In the summer of 1970 there were 2 groups at Denison Armouries (and Led Zeppelin’s Whole Lotta Love was released). The GGHG Reserves who primarily used the ground floor and a 2nd group of similar size whose name I forget used the basement next to the shooting range.

They called us the GeeGee’s or the Giddy-Ups and other comical and somewhat derogatory nicknames while making neighing noises. In response, and because they had Civil Services or something of the sort in their name, I remember responding that our toilets were plugged and we needed their service, and whatever else they might also be good at while on their knees in the latrines!

I think the program was for 10 weeks. Once a week the Paymaster would show up with a large briefcase, call out our SIN#’s, and we’d step forward marching properly, of course. Confirm our SIN# at attention. He’d count out the $72 we were paid each week, and just as formally we’d return to our spot on the line.

So a good lead would be my SIN# as mine (123-456-789) was given to me at Denison Armouries the 1st time I was ever paid, by anyone. The guy ahead of me, whose surname would be ahead of mine alphabetically and presuming he didn’t already have a SIN# therefore would have been SIN# 123-456-789. And the guy whose surname was after mine… Well, I think you get the picture.

I do know that one guy in our group, Davidson, got so many $5 fines every week for clowning, insubordination, etc., that I think there were a few weeks where he didn’t get paid but $10 or 20.

I also know that about a half dozen of the guys went on to the REG’s and spent some time in Germany and elsewhere.

I learned to drive, starting with a 5 ton truck with 30 guys in the back in the fields behind Denison Armory when it was called Downsview Air Force Base. Learned to throw grenades in that field, too. We spent a few days at CFB Borden and a week at Pettawawa learning to shoot, march, play night-time war games, etc. Loved those lil Sterling Sub-Machine guns, but hated that they put saltpeter in the mashed potatoes – didn’t they?

P.S.  If you track any of these guys down, or there’s a reunion or similar, I’d appreciate knowing. Military service has always been a family tradition, on all sides of the family – attachments. 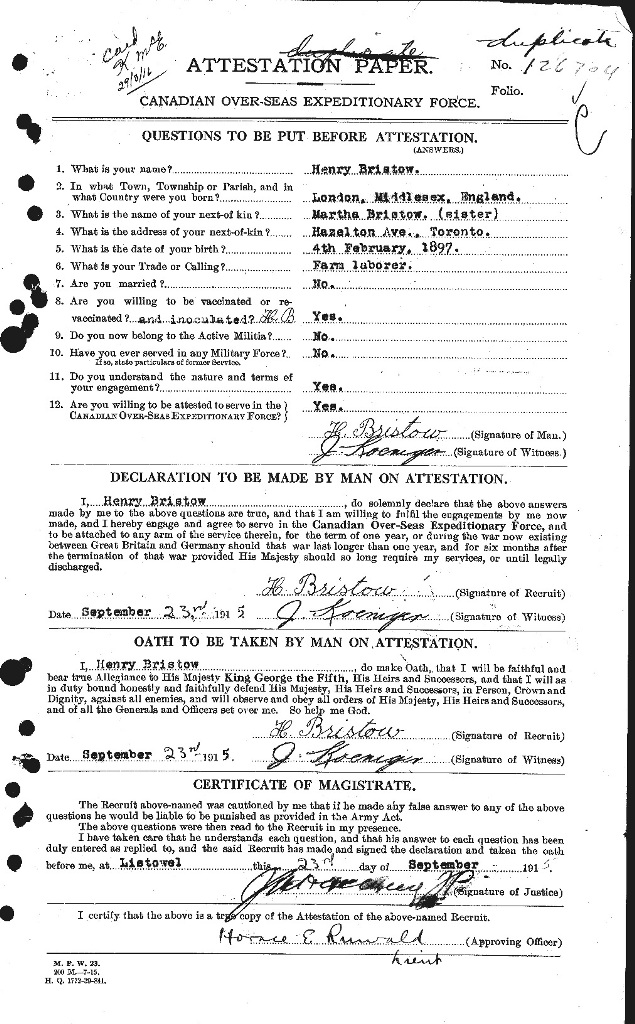