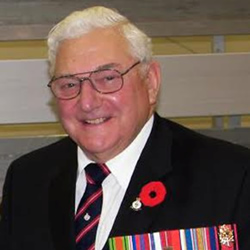 Sadly, we have lost yet another member of the Regimental Family with the passing of Major Eric Constantinides  on Monday, February 15, 2016 at the Lakeridge Health Centre in Port Perry, at age 86.

Eric served with the Governor General’s Horse Guards for many years as the OC of the Cavalry Squadron which he was proud to lead on Royal Escorts in appearances at the Queen’s Plate and numerous ceremonial events. Our heartfelt condolences go out to his wife Carolyn (Kurtz) of Sunderland and his son Brian Constantinides and his wife Janine Hammond of Port Perry.

Cremation has taken place and as requested by the family, there will be no funeral service. However, a celebration of Eric’s life will be announced at a later date. If desired, memorial donations may be made through the WAGG FUNERAL HOME, 216 Queen Street in Port Perry (905-985-2171) by cheque to the Port Perry Hospital Foundation. Memories, Photos and condolences may be shared.