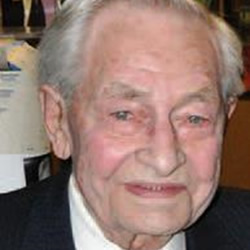 Long-time resident of Toronto and frequent visitor to his ranch in Alberta. Predeceased by his loving wife of 54 years, Margaret McGuinness in 2009. Survived by four sons, Patrick (Kerry) of Toronto, John of Aurora, Brian (Jerry) of Salt Lake City, Utah and Bruce (Samantha) of Toronto and four grandchildren Katie, James, Hunter, and Holden. Born in Calgary Alberta, graduate of the University of Alberta, BSci.Ag, 1941 including commission in the Canadian Officers Training Corps; WWll service in the 31st Alberta Recce. Regt. and overseas as Captain at Canadian Military H.Q. Upon returning to Canada, he joined Canada Packers Limited in Edmonton and in 1947 moved to Toronto as advertising manager.

He joined the Governor General’s Horse Guards Militia Regiment where he reactivated the Regiment’s pre-war historic ceremonial mounted squadron and commanded the royal escort for Queen Elizabeth at the Queen’s Plate in 1958. He retired with the rank of major, continuing as a member of the Regimental Board of Trustees. Mac was a long-time supporter of the Royal Agricultural Winter Fair as volunteer and judge; Grand Knight and former Commander of the Toronto Commandery of the Order of St. Lazarus; member of the Royal Canadian Military Institute, the Canadian Armoured Corps Association and the Eglinton- Caledon Hunt. The family wishes to thank the staff of the Department of Veterans Affairs for the excellent help in providing independent living assistance during Mac’s later years.

Donations in Mac’s memory may be made to the Toronto Commandery Hospice (www.ttch.org) or GGHG Calvary and Historical Society (www.gghgsociety.org)

It is with great sadness that I inform you of the passing of Maj Burka today (December 31).  As many of you know he was one of our few remaining veteran heroes from the second world war. On behalf of his Regiment I pass on our deepest condolences to his family. A great Horse Guard who will truly be missed and never forgotten.