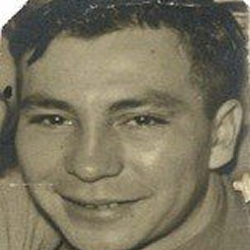 It is with much sadness that we announce the passing of George Lindsay Beeswax on January 4, 2019 at age 86. He was the younger brother of GGHG Veteran William Beeswax who was killed during WW II on October 27th, 1944 in Italy and buried in the Cesena War Cemetery. On May 22 of this year, Veteran Ed Stafford, who knew William, visited the graveside along with members of the Regiment and placed a Canadian and Regimental flag near the headstone. Sadly we only learned of George’s death when we attempted to tell him about our visit to Italy.

George was a was a Master Carpenter and a member of the Chippewas of The Thames First Nation George and a proud family man. He was a generous parent to his children (Brian), Denise and Lonnie and will be sadly missed and fondly remembered by his many friends whose lives he touched. George was a Veteran of the Canadian Forces and proudly served in the Canadian Army while stationed in Germany after the War. There was a gathering at his residence on Saturday January 12th, followed by Interment at Bear Creek Cemetery.

On behalf of all the Members of the GGHG Association, I extend our deepest condolences to all of the Beeswax family and our gratitude for George’s service to Canada.