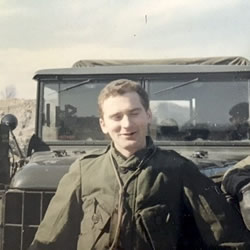 On Tuesday March 30, 2021, former Horse Guard Sergeant (Ret’d) Terry Bannon passed away, following complications from a stroke he suffered a year ago.

Terry joined the Governor General’s Horse Guards as a Cadet while the Regiment was still located at the University Armoury. When the Regiment moved to Denison Armoury in 1960, Trooper Bannon transitioned from Cadets to the Regiment.

In 1968, Corporal Bannon was part of the Militia Flyover, serving four months with the Lord Strathcona’s Horse LdSH(RC), in Fort Beausejour, Iserlohn, Germany as part of the the British Army of the Rhine (BAOR). One year later, Terry was promoted to Sergeant and served the Regiment until 1970 when work and marriage took him out of the city and ultimately retiring in Minden, Ontario. During his career with the Horse Guards, Terry also rode as a member of the Cavalry Squadron, in the Queen’s Plate, Opening of the Ontario Legislature and many other escorts.

Terry continued to remain socially connected to his Regiment, attending many Regimental functions and was present at many Annual Memorial Dinners. He was also an avid curler, participating in many IRONSIDES curling gatherings over the years.

Terry Bannon will be cremated and buried with family members in Minden . He was 75 years of age.