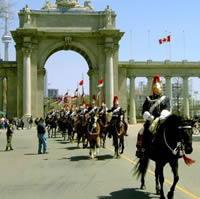 The GGHG Cavalry Squadron was reformed in 1956 by members of the Regiment who, upon returning from the war, wished to maintain the Regiment’s cavalry skills and traditions. The Squadron has had the honour of providing escorts to the Queen, the Queen Mother and many Governors General and Lieutenant-Governors. (for a more detailed history)

The Squadron participates in a number of Ceremonial functions such as parades and guard duties. The Squadron also performs a number of demonstration rides, like the Musical Ride, and  tent-pegging with the sword and lance.

The Squadron ride season typically runs from March to November, peaking in the summer months. Year to year, there are notable exceptions to this and there are some impressive events that happen in the off-season. You can see a list of upcoming events where the Squadron will be on parade.

If you are interested in riding with the Squadron please check out the recruiting page for more information. 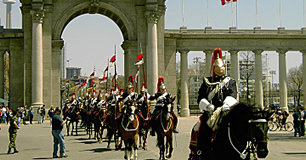 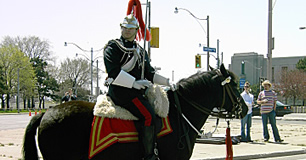 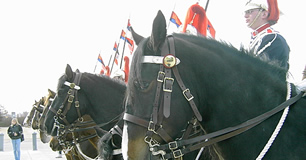