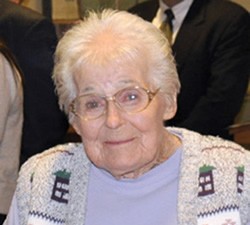 As we mark the passing of each WW II Veteran, we also take the time to remember the contributions by the surviving widows while their husbands were overseas and when they returned home.

On Friday, October 31, 2014 at Lakeridge Health Oshawa, Mrs. Joan Wilson passed away peacefully with her family by her side, in her 92nd year. Joan was the beloved wife of the late Earl (Bus) William Wilson a GGHG WW II Veteran and one of several members of the Oshawa Motorcycle Club who joined the Governor General’s Horse Guards when they heard that a motorcycle Squadron was going to be formed in Borden. Joan is survived by her children Wendy (Chuck Trotter), Judy (Butch Lambert), Eleanor, Margaret Wilson, and Edward (Pamela). A funeral service was held on November 4 at MOUNT LAWN FUNERAL HOME in Whitby  followed by cremation.

To all of Joan’s very large extended family, I offer deepest condolences on behalf of Members of the Governor General’s Horse Guards Association.