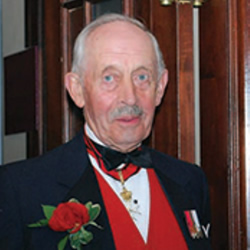 As we start a new year, we sadly have just learned that in 2019, we lost another Horse Guard who was a part of this Regiment’s rich and colourful history. Captain Werner Wegner passed away peacefully on February 20, 2019 in the Carleton Place Hospital, Ottawa, with his family beside him. He was 89 years old.

Captain Wegner was born in the community of Altona in Hamburg, Germany. He discovered his passion for horses while employed on a work farm during WWII, in what became after the war, East Germany. He came to the GGHG Cavalry Squadron in the early 70s and also introduced his vast knowledge and skill in horsemanship to a small core of young cadets chosen from local neighbourhoods. Many of these young men went on to participate in Royal Escorts and the Queen’s Plate. One of the most notable graduates from his training program was the Regiment’s former Commanding Officer, Lieutenant Colonel Scott Duncan.

He is survived by his wife of 64 years, Ingeborg, and children Isabell (Jorg), Michael (Monique), Christina (David) and Louisa (Larry), and to them we convey our heartfelt condolences and gratitude for his service.