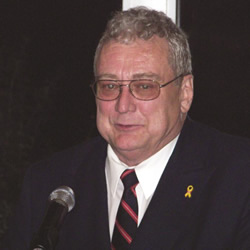 I regret to inform the Regimental Family of the passing of one of our more colourful members this weekend.

Capt. Harry Tye passed away at his home in Elliot Lake on Saturday, September 28, 2013.  The son of a former Commanding Officer and Honourary Lieutenant Colonel, LCol Harry T. Tye, Harry served through the 1960s and ‘70s. He will be remembered as a member of the Sergeants’ Mess, before he moved “upstairs” at the old Denison Armoury, upon being commissioned. A solid field officer in his day, Harry was also known for “tactics” in the Mess and at Memorial Dinners where he would frequently ambush the unwary. A self-appointed “Steward” of Regimental traditions, Harry always maintained contact with members of the Regiment from retirement in Elliot Lake. It was Harry who named our newsletter, “Regimental Lines”.

Capt. Tye is survived by Barbara, his wife of 40 years, and son Harry. He is pre-deceased by daughter Robyn, and parents Margaret and LCOL Harry T. Tye.

A memorial service and reception is being planned at the Royal Canadian Legion in Barrie.