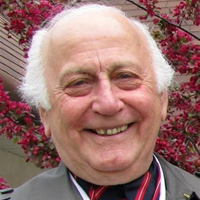 It is with sadness that we announce the passing of Cpl William “Bill” Tkachuk, former Member of the Governor General’s Horse Guards Cavalry Squadron and Riding Club, on Sunday, February 7, 2021, at St. Joseph’s Hospital, Toronto at the age of 90 years.

Bill was born in Ethelbert, Manitoba to parents Matt and Mary Tkachuk on June 14, 1930. He attended the local school, then completed his schooling at St. Vladimir’s College, Roblin, Manitoba. Bill was employed by the CPR (as was his mother-in-law’s father, Onufer Warwick also known as Onufer Wawrykowich) until his retirement.

He enjoyed music and culture and especially singing. He rode on his horse, ‘Big Red’ with The Governor General’s Horse Guards who paraded through Toronto in the annual Eaton’s Santa Claus Parade and participated in many Remembrance Day ceremonies. Especially notable was the occasion when the Guards escorted Queen Elizabeth II during her visit to Toronto.

He is survived by sister Edna Goran, Winnipeg, sister Anne Styles, Pinawa, and sister-in-law, Maxine Tkachuk, Dauphin, Manitoba. He was predeceased by his father Matt, December 11, 1993, mother Mary, June 21, 1998, brother Sylvester, on May 21, 2017, brother-in-law Elmer Goran, October 7, 2004, and brother-in-law Roy Styles, August 20, 2019. Bill is survived by his loving wife Starr (2024 would have been their 50th anniversary), numerous nieces, nephews and extended family. Many thanks to Ramon Bueno, Bill’s caregiver in his final years. Bill will be laid to rest at Mount Hope Catholic Cemetery in Toronto alongside Starr’s parents, Mary and Mike Linycia. May Bill’s soul rest in peace, his voice joining the angel’s choir above.

On behalf of the Governor General’s Horse Guards Association, I extend our deepest condolences to Star and all of Bill’s extended family.