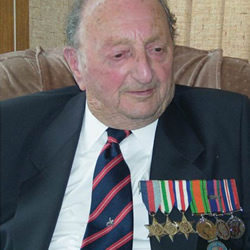 Today is another sad day for the Regimental Family as we have lost one of our oldest surviving Veterans, Sgt. Alfred Sellers.  Al passed away in the early hours of this Wednesday morning at Sunnybrook Health Sciences Centre where he was a resident in the Veterans’ Wing (K) for the past few months. Al and his brother Bob both served overseas and he saw action with the Regiment in Italy and Holland during the War. He also served as President of the Governor General’s Horse Guards Association and was one of the key figures instrumental in the survival of the Association.

For those of you who did not have the pleasure of meeting or knowing Al Sellers, this was a man who was fiercely proud of his Regiment and despite his failing health his interest in what the Regiment was doing never waned and he looked forward to receiving his newsletter. Also, before the Regiment initiated the annual Remembrance Day ceremony, Al and his wife Marie could always be found that day at York Cemetery reflecting and remembering his lost comrades. He was also featured in an earlier issue of Regimental Lines.

To Marie and his family, we in the Association offer our deepest condolences at this time of loss which is shared and felt deeply by many of us.