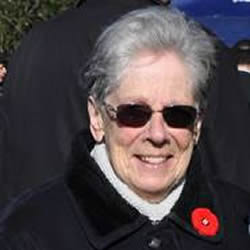 It is with profound sadness that I announce the passing of Marie Sellers on Thursday January 5, 2017 at Sunnybrook Hospital, Toronto. Marie was the widow of the late Sgt. Al Sellers, a WW II Veteran and President of the GGHG Association during the post-war period. Al passed away in 2014 but Marie has been a silent but strong supporter of this Regiment and her marriage to Al was a love story about a young bride who waited for her groom to return from the War to marry him. Sadly, in a phone conversation with her just before Christmas, we learned that she had contracted cancer of the oesophagus and it now appears that her condition rapidly deteriorated and she was hospitalized at Sunnybrook where she passed away.

There are no details regarding her funeral at this time but she will be remembered not only for her devotion to her husband Al, but also for her love for this Regiment which in recent years brought her to the Remembrance Day Ceremony each year at York Cemetery.

On behalf of all Members of the Association, I extend our deepest condolences to her family on the loss of their sister and Aunt.