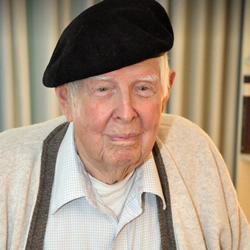 As we start a new year, the Roll Call of our Veterans continues. Sadly, we have learned that Captain Douglas Scythes, our oldest surviving Post WW II Officer, passed away this past October. Captain Scythes as a young officer, served in the Regiment during the 1950’s. In February 2018, his wife Dorothy, to whom he had been married for 68 pears, passed away and in September of that year, he was one of the six Horse Guards Veterans, visited by Members of the GGHG Association Executive and presented with a Quilt of Valour.

To his daughters, Sarah (DeeDee) Scythes and Wendy Quade, we extend our deepest condolences  and our thanks for his service to the Regiment and Canada