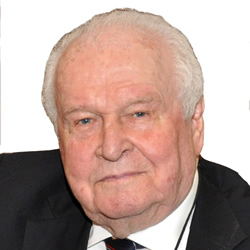 It is with sadness we report that Col Robert “Bob” Rutherford died peacefully under superb care at K-Wing, Sunnybrook Health Sciences Centre, Toronto after a life of devoted service to his country in war and peace as a Soldier, Lawyer, Judge, Royal Commissioner, tireless volunteer and fundraiser for Veterans and their families in need. He was 97 years of age.

The family will receive friends: