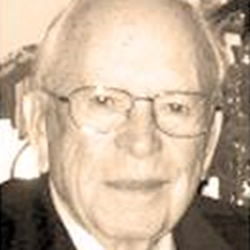 REID, Ernest Angus Ernie Reid passed away peacefully on January 11, 2008 in a Calgary Hospice surrounded by family, following a two month illness. Ernie, born on November 27, 1920 in Saskatoon, Saskatchewan, was the youngest of four children of Amelia and Angus Reid. Ernie attended school at Central Park High School in Saskatoon. In the late 1930s he enrolled in the ROTC and entered the University of Saskatoon in 1939, graduating with his Bachelor of Commerce Degree in 1942. At St. Thomas Moore College while trying out for a part in Oscar Wild’s “The Importance of being Ernest”, he met Lorna Marie Hogan, who became his lifelong friend, companion and wife. Married in December 1942 they were together for only four weeks before Ernie was shipped off to Europe as a re-enforcement Lieutenant where he served in tank warfare with the Governor Generals Horse Guards and saw action in North Africa, Italy and Holland. His first son Michael was born in Saskatoon while Ernie was overseas. After the war Ernie and Lorna had seven more children Jane, Angus, Patrick, Bill, Anne, Mark and Sheila. Heading a tight knit and deeply Catholic family, Ernie spent his entire career as an executive with the Simpson Sears retail chain – beginning in September 1946 as a management trainee at the Robert Simpson Company in Regina and retiring in May 1984 as General Manager for Western Canadian Operations based in Edmonton. During his distinguished career Ernie and his family lived in many cities including Vancouver, Nanaimo, Winnipeg, Toronto, St. Catherine’s and Edmonton. Ernie contributed to the community through volunteer work and served on many boards. He was a past Chairman of the United Way, served on the Board of the Neuman Theological Centre, the Board of the Commonwealth Games and was involved in the Serra Club. Ernie was a long time parishioner of St. John the Evangelist Church. He was a member of the Royal Glenora Club and the Mayfair Golf and Country Club. In later years after he quit golfing Ernie enjoyed many years playing bridge at these clubs. Predeceased by Lorna in 1994, his brother Bill in 1989 and sister Helen in 1990, he is survived by his sister Jean, his eight children; his in-laws – Kurt, Margaret, Sonia, Kendall, Ruth, Denise and Brian. He is also survived by fifteen grandchildren (Jennifer, Andrew, Megan, Michael, Kathryn, Allison, Mika, Paul, Tom, Kathleen, Emily, John, Claire, Mark and Ellen) and three great-grandchildren (Edward, Jacob and Ryan). Ernie had a wry sense of humour evident to all who knew him, most especially his family. He loved camping, fishing, golfing, puttering in the yard and listening to the antics of his children. In later years he most enjoyed visiting his family, who live across Canada. He loved to hear about his grandchildren’s lives and activities and was always a strong supporter of them. His children and their families will deeply miss him.