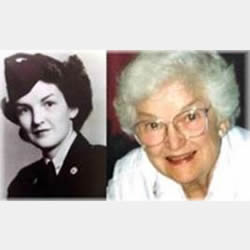 Mary Patricia Radley-Walters, known as “Pat” to many, and affectionately as “Mom” and “Granny” to family, passed away peacefully in Kingston on September 4, 2016, at the age of 95. She was the loving wife of Brigadier General Sydney Valpy Radley-Walters (deceased) for 68 years. Beloved mother of Gary (Martha), Grant and his wife Maureen, Chris (Sue deceased), and Greg (Kumla deceased). Proud and loving grandmother of Alison (Scott Nichol), Elizabeth (Patrick Childerhose), and Mark Radley-Walters, and Sarah, Caitlin, Cairis, Phaidra, Lilly, Estelle, and Rowan. Great-Grandmother of William and Olivia Nichol. Predeceased by her first husband Nairn Stewart Boyd (1917-1944) and her five siblings John Grant Holbrook, Harold Darwin Holbrook, Robert Howard Holbrook, George Holbrook and Margaret Holbrook.

Patricia was the daughter of the late, prominent, Hamilton Doctor, John Howard Holbrook and Myrtle Ostrosser. She was born in Hamilton, Ontario on August 11, 1921. Patricia earned her Grade Ten Piano from the Royal Conservatory of Music and played beautifully, well into her 80s. Patricia learned to drive when she was 14 in 1935 and drove regularly until she turned 91. Patricia obtained her B.A. from McMaster in 1943 where she met her future husband, Nairn Boyd. She boarded the Lady Rodney in1944 and served her country as a Red Cross Nursing Assistant in London, England during the Blitz. Nairn Boyd was killed in action in Normandy in July 1944. Subsequently, Patricia met and later married Sydney Valpy Radley-Walters. She attended the medical program at the University of Toronto. She was a loving wife and mother and superbly fulfilled the role of a high-ranking military wife. She helped her family to adjust to the many postings including Bordon, Petawawa, Virginia, Kingston, Gagetown, Germany, Paris, and Ottawa.

Patricia enjoyed retirement at their much-loved Whiskey Jack Farm in the Killaloe-Wilno area in Ontario, where she walked daily and appreciated the varied wildlife sightings. After moving to Kingston, Patricia enjoyed attending the Kingston Symphony Orchestra and participating in courses with Later Life Learning into her 95th year. She will be remembered for her independent spirit, her love of travel, books, music, art and culture. She was an excellent role model on maintaining a healthy active lifestyle. She will be greatly missed. Her spirit lives on.

Funeral arrangements are under the direction of ROBERT J. REID & SONS, according to Patricia’s wishes. The funeral will be at the Anglican Cathedral Church of St. George, 270 King Street, Kingston, on Saturday, October 22nd at 11:00 am, with a reception to follow. There will be a family interment service at St. Paul’s Church in Percé, Quebec. Special thanks are given to the caring staff at Riviera Saint Lawrence Place and the staff of the KGH 6 and 9. If desired, donations in memory of Patricia can be made to Wounded Warriors Canada and to the Kingston Symphony Orchestra.