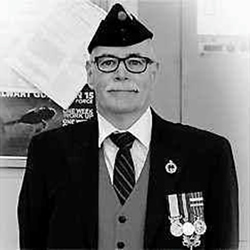 Scott passed away on February 10, 2016, surrounded in love by friends and family after a brave battle with cancer. Scott was a currently serving member of 32 Brigade Headquarters, Battle School, The Queen’s Own Rifles of Canada and Toronto EMS. Scott is survived by his loving family, sister Ann Ward (Frank), brother Brian (Lesley), twin brother Bruce (Paula) and brother Mark (Denise), preceded by his father Ivan, mother Maureen and “partner in crime” David Keenan. Paddy will also be greatly missed by best friends Philip and Heather ten Kortenaar, David Newton, John Wilmot and Shaun Kelly. He was the favourite uncle to Bradley, Kevin, Gavin, Erin, Austin, Andrew, Meagan, Erin and Liam. He will also be missed by many friends and family across Canada and in his beloved Northern Ireland.

A proud member of the Toronto Militia for 38 years, a Military Service will be held at Moss Park Armoury, 130 Queen St. E. in Toronto on Saturday, February 20, 2016 at 11 a.m. Reception to follow. Please wear your appropriate Regimental dress and medals and for GGHG Association members, dress will be Blazer and flannels with full medals.