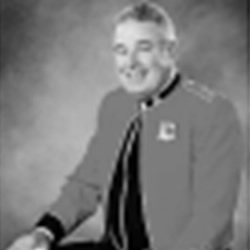 LIEUTENANT COLONEL (RET’D) LEO PAUL MORIN, CD Past Commanding Officer and former Honorary Lieutenant Colonel, The Ontario Regiment (RCAC); retired employee of General Motors’ Oshawa Truck Assembly Centre. Suddenly at his residence on Monday, July 22, 2013, in his 70th year. Predeceased by his parents Ernest and Mae Morin (nee Courtney). Loving and devoted husband of 43 years to Alexandra (Sandy) Hill. Cherished father of Victoria and Andrew (Katrina). Adored Papa to Caroline and Beatrix. Dear brother of Margaret (Toronto) and Joe. Loving uncle to Diane and Lisa and predeceased by his nephew David. Fondly remembered by his cousins Doug in Oshawa, Ron in Australia, and his aunt Yvette Morin and several cousins in St. Lin and Montréal, Québec. Leo’s selflessness, humour, compassion, and gentle moral character will be sorely missed by his family, friends, colleagues and military comrades. LCol Morin had a long and distinguished record of military, professional and volunteer service. Born in New Liskeard on August 15, 1943 and raised in Oshawa, he graduated from Holy Cross Catholic School and Oshawa Central Collegiate Institute. He joined Royal Canadian Sea Cadet Corps “DRAKE”, attained the rank of Chief Petty Officer, and became a Midshipman on the Cadet Instructors List. He was promoted to the rank of Lieutenant (Navy) in 1965 prior to being commissioned in 1966 as an officer in The Ontario Regiment (RCAC). He filled all key unit appointments and served as its Commanding Officer from 1980-83, after which he served on the Directing Staff of the Militia Officer Training School (Toronto) and the Canadian Land Forces Command and Staff School (Kingston). In 1988, he was appointed Deputy Commander, Toronto (Militia) District, now 32 Canadian Brigade Group. In 1994 he was posted to Land Forces Central Area Headquarters, where he served as Senior Staff Officer (Armour) until his retirement from the Army in December 1997. LCol Morin served as President of the Royal Canadian Armoured Corps Association (Cavalry) from 1984-85 and was a Life Member on Council from 1997-2005. For 30 years he served as a member and, later, Chair of the Ontario Regiment’s Senate, Board of Trustees, and Foundation. More recently, he was a regional governor of Reserves 2000, where he tirelessly advocated on behalf of Canada’s Reserve Force personnel. He served as the Ontario Regiment’s Honorary Lieutenant Colonel from 2002-07 and was Treasurer of the National Council of Honorary Colonels (Army) from 2004-09. In civilian life, Leo was briefly employed at Duplate (Oshawa) before joining GM’s Oshawa Truck Assembly Centre, serving in various industrial engineering positions for 37 years until his retirement in August 2001. More recently, he was a member of the General Motors Salaried Employees Organization (GENMO) Political Action Committee, which is fighting for the welfare of GM Canada’s salaried retirees. LCol Morin’s volunteer and community service was extensive: a former member and advisor to the Navy League of Canada; founding member and lifelong volunteer at the Ontario Regiment Ferret Club; President and Chair (until his death) of the Ontario Regiment Museum and Oshawa Aeronautical, Military and Industrial Museum; member, Oshawa United Veteran Services Committee and an organizer of Oshawa’s annual Festival of Remembrance; President, Ontario Regiment Association; Director, Great Lakes Financial Company, Canadian Corps of Commissionaires. A member of the Royal Canadian Military Institute for over 30 years, he served on its Board of Directors from 2010-12. He was a member of the Fort York Branch 165 Royal Canadian Legion, Friends of the Canadian War Museum, Conference of Defence Associations Institute, and an honorary member of the Korea Veterans Association of Canada, Unit 11 (Oshawa). LCol Morin was awarded the Queen’s Silver, Golden and Diamond Jubilee Medals in addition to the Canadian Forces Decoration with two bars.