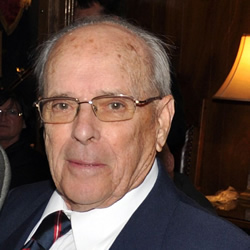 Today the Regiment is in mourning, for another Veteran has passed away.. We have now learned that WW II Veteran, Trooper Jack Lusty, our last remaining Horse Guard in the Veterans Centre Resident Care at Sunnybrook Hospital died this past December. Jack was reunited with the Regiment in 2011 when he had a chance encounter with fellow Horse Guard, Ross Rennie, in the elevator at his Whitby condominium. Ross was wearing his Horse Guard tie which Jack recognized and that meeting led to his attendance at that year’s Annual D-Day Dodgers Dinner with the Ontario Regiment Association in Oshawa, where he was one of five Veterans presented with a plaque by the Mayor.

Jack has been a resident at Sunnybrook for the last six years and in September 2018, he along with fellow Veterans Ed Stafford and Larry Small, were presented with their Quits of Valour by the Association.

On behalf of the Members of the GGHG Association, I offer offer our deepest condolences to the Lusty family and in the words of Canadian Veteran and poet A. Lawrence Vaincourt:

“If we cannot do him honor while he’s here to hear the praise,
Then at least let’s give him homage at the ending of his days.
Perhaps just a simple headline in a paper that would say,
Our Country is in mourning, for a soldier died today.”