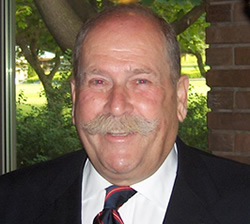 It is with great sadness that we announce the passing of a notable Horse Guard. Our Honorary Lieutenant Colonel Jeff Dorfman passed away at approximately 0530 hrs on Tuesday, September 2, 2014 at Sunnybrook Hospital after a prolonged battle with cancer.

From the ranks of a Trooper, Col Dorfman rose to become the Regimental Sergeant Major and ultimately the Commanding Officer of the Governor General’s Horse Guards.

Among his other accomplishments, Col Dorfman was an avid supporter of the Royal Canadian Military Institute and served as their President for two terms, one of only three people to be extended in almost 125 years of the Institute’s existence. He also chaired the annual gathering of Cavalry officers at the RCMI Cavalry Luncheon, a role that seemed to be his for as long as he wanted it.

There will be many tales in the coming days about Jeff but his continuous connection to the Regiment is unmatched and although he was not a musician, his interest in the Regimental Band was more than casual.

The family has asked that memorial donations be made to The Governor General’s Horse Guards Foundation.