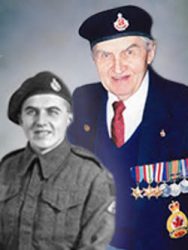 Sadly, we have just learned of the passing of GGHG WW II Veteran, Trooper Peter Paul Hires on June 18, 2017 at the age of 97. Peter immigrated to Canada from Romania and during the war, served as a paramedic with the Regiment from North Africa right through to Holland.

In recent years he has been living in Calgary where he could be close to his two sons, Thomas and Peter. During Peter’s retirement he was involved in activities at Kirby Centre, volunteering as a driver for meals on wheels, fund raising for the Legion Poppy fund, and other weekly events at the Royal Canadian Legion, Centennial branch # 285.

Graveside Services were held at Queen’s Park Cemetery in Calgary, June 23, 2017. To Thomas, Peter and all of the Hires family, I extend my deepest condolences on behalf of the Members of the Governor General’s Horse Guards and we honour their Dad’s service to Canada and the Regiment.