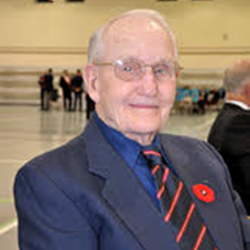 We learned that WW II Veteran Sgt. Earl “Jiggs” Harlock, passed away February 18 at the Hillsdale Terrace Nursing Home in Oshawa at age 97.

Jiggs considered himself an “Original Horse Guard” in that he enlisted at the University Avenue Armoury to join the Regiment in 1940 at age 22.

Jiggs and friends from the Oshawa Motor Cycle Club joined the military to be part of what they thought was going to be a Motor Cycle Squadron but soon found themselves in tanks. While many of his friends lost their lives in Europe, Jiggs was assigned as a training instructor in Aldershot, England for the duration of the war. It was an assignment that he regretted all his life because of his desire to be on the front with his buddies.

To the very end of his life, Jiggs was a proud Horse Guard and lived long enough to join us in 2010 for the Regiment’s 200thAnniversary and was among the Veterans recognized in 2011 at the D-Day Dodgers Dinner in Oshawa. As per his wishes, Jiggs will be cremated and there will be no other funeral arrangements.

To his children Robert (Nancy) and Scott (Katie) and daughter Jo Ann (Robert) all of Comox, BC and his extended family, we of the Governor General’s Horse Guards Association, send our deepest condolences and honour his service to the Regiment and Canada.