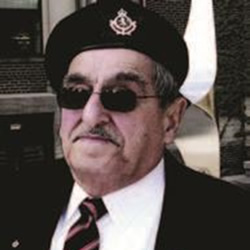 It is with much sadness we report  that WW II Veteran, former President and Member of The Governor General Horse Guards Association, Harold Goldman, passed away peacefully, on Thursday, March 7, 2013 at North York General Hospital. Harold was also a member of the Royal Canadian Legion General Wingate Branch 256. He was the loving father and father-in-law of Heather and Robert Kaplan (London, ON), Louise and Ken Hill, Cheryl Goldman, and Barbara Goldman and is also survived by his wife Anne, to whom he was married for 67 years.

Harold was fully dedicated to serving the Association and was its President at a time when the organization needed his leadership. He also served until last year as the Veterans’ Representative on the committee. On behalf of all Members of the Governor General’s Horse Guards Association, I would like to express our deepest condolences and sympathy to Anne and all members of the Goldman family.