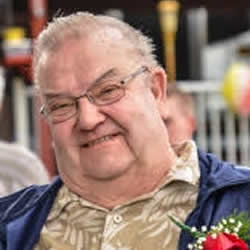 It is with a sense of deep sorrow that we have learned of the peaceful passing of GGHG Association Member “Jack” Samuel John Gill with his family by his side at the Smiths Falls Hospital on Sunday, April 10, 2016 in his 85th year. Jack was born in Newfoundland, resided in Toronto and retired in Smiths Falls. He served as a Trooper with the Governor General’s Horse Guards and later became one of the most beloved bartenders of the Warrant Officers and Sergeants’ Mess at the old Denison Armoury.

He is survived by his wife Pearl (nee McGee) and his children Debra (Robert) and Fred (Barb) and to them I send deepest condolences from the Regimental Family.

Last summer, following the Armoured Corps Golf Tournament in Smiths Falls a number of Association Members visited Jack and Pearl and spent time reminiscing about the good times at Denison Armour and many former Horse Guards will deeply mourn his passing. As per Jack’s wishes cremation has taken place and there was no visitation or service. A Celebration of Life will take place at a later date. In lieu of flowers donations can be made to the Heart and Stroke Foundation or the Canadian Lung Association.