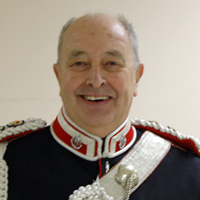 It is with a heavy heart that we have learnt the news of the passing of Colonel David Friesen, CD on February 10, 2021  at the age of 82, with Marilyn and his family by his side.

David was a Horse Guard for almost 60 years, serving not only as a past Commanding Officer of the Regiment but also Honorary Lieutenant Colonel, Honorary Colonel and Chairman of the Board of Trustees.  His passion for our Regiment was always strong and his legacy will be remembered through his many efforts, most notably the establishment of our Regimental Museum.