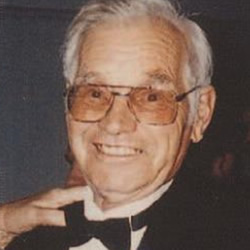 It is with a great sense of loss that the family of Sgt William “Bill” Kenneth Forsythe announces his passing at his residence and with loved ones at his side at the age of 94 on Friday, February 15, 2013. Bill was the beloved husband of Ruth (née Brownridge) Forsythe with whom he would have celebrated their 60th wedding anniversary on October 3rd this year. They were constant companions and spent many wonderful years together with their family. He is also survived by his children: Marg and her husband Chris Jones, Mary Anne, and son John and his wife Heather.

Bill served in WWII from 1939 to 1945 with the Governor General Horse Guards in Holland, Belgium, North Africa and Italy, under Maj Alan Burton and was one of the oldest surviving Veterans of the Regiment. Cremation has taken place and a celebration of Bill’s life will be shared later this summer at the family farm where he enjoyed so much of his life.

The Governor General’s Horse Guards Association sends its heartfelt condolences to Ruth and all of Bill’s family at this time of loss.