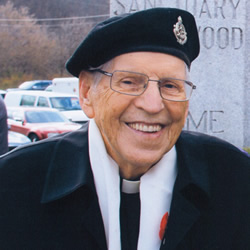 Trooper George Elson passed away, on April 18, 2017 at Brantford General Hospital. He is survived by his wife and best friend Joan (nee Baxter) and his daughters Ann and Gladys (John) of Cudworth, England.

George was involved since birth with St. James Anglican Church in Paris Ontario. In 1941 he enlisted in the Army at the age of 17 and served with the Governor General Horse Guards and the Armoured Division in the Italian Campaign as a Non-commissioned Officer and Tank Commander. He answered a call to the Priesthood in the Anglican Church and took his Theological Training at Wycliffe Theological College in Toronto.

After ordination George served as Priest in Bancroft, Tyendinaga Indian Reserve, Brockville, Massena, New York and finally returning to St. James, Paris as an Honourary Assistant to the Priest and Chaplain of the Royal Canadian Legion in Paris.

A Legion Service under the auspice Royal Canadian Legion Branch # 29 will be held at the funeral home on later today (Friday) at 6:00 PM. Donation to St. James Anglican Church or the Legion Poppy Fund would be appreciated.

To the Elson Family and particularly to his nephew Todd who has helped George maintain the link with the GGHG Association and accompanied him to the D-Day Dodgers Dinner (May 31, 2014, Stouffville Legion), I send our deepest condolences on behalf of all Members of the Association.