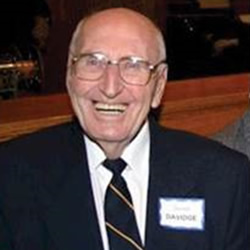 Born in Ilfracombe, England, Donald immigrated to Canada on July 1, 1920 as a babe in arms with his parents, Frank and Ethel (Helson). Predeceased by his parents, younger sister Gladys (Milford) Brigham and wife Jean (Greig). Father to Lesley (John) Eisel he was “Tic Toc” to his granddaughters Bryden and Kendra whom he loved very much. Much loved dad and best friend to daughter Laurel Davidge. As a young man Don voluntarily joined the military and went off to war. He was a highly-decorated tank commander with the Governor General’s Horse Guards and The Three Rivers Regiment. He saw action in North Africa, Sicily, Italy and fought in the Battle of Ortona in December 1943. He proceeded with his troop through France, Belgium and was very involved in the Liberation of Holland in 1944 – 1945. Returning to his home town, Toronto in 1946, he followed his passion and joined the Toronto Police Force, eventually rising to the rank of Sergeant of Detectives. Don attended many graduating classes for new Metro Toronto Police cadets and his Ceremonial Sword hangs in their Museum. With his ready smile, quick wit and zest for life, he was always there to lend a hand, open a door, offer a ride or have a game of cards and even share a colourful joke. He loved helping people. Recognized for significant community contributions, he was honoured with the Queen’s Jubilee Medal, the Key to the City of Orillia, along with numerous Trillium Awards for his care of the gardens at St. John’s United Church in Agincourt. Dad proudly served his country and the City of Toronto. He was thankful for his family, many friends and abundant life right up to the very end. In his own words “I’ve been very lucky in this life haven’t I.” A Very Special Thanks goes to all of Dad’s caregivers at the Chartwell Kanata and to those who kept him comfortable at the Queensway Carleton Hospital.

Please make a donation to the Alzheimer Society, Ducks Unlimited or a charity of your choice.