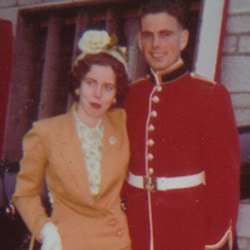 It is with great sadness that we note the sudden death of Bill Claggett on February 3, 2012, loving husband of Heather Ann Claggett and father of Colonel Jay Claggett, former Commanding Officer of the Governor General’s Horse Guards.

The members of the Governor General’s Horse Guards Association joins with the rest of the Regimental Family in offering their deepest condolences to Col Clagget and his family at this time of loss.