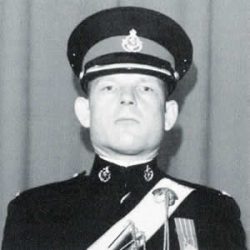 It is with deep sadness that we find ourselves marking the end of this unusual year with the passing of retired OC of Headquarters Squadron, Capt Hans G. Bush, CD, who also served as the Regimental Sergeant Major of the Governor General’s Horse Guards from 1970 to 1974.

Since Hans’ retirement, Capt (Ret’d) Jim Davis, another former Regimental Sergeant Major of the Regiment,  was one of very few who maintained an ongoing relationship and contact with him. This past week, after futile attempts by Jim and his wife to reach Hans to convey their usual well wishes for the season, the Toronto Police was contacted and a visit to his west-end apartment resulted in the discovery of his body with signs that he had been deceased for several days.

Until there is a coroner’s report, the cause of death is unknown at this time. I know there are many who served with Hans or in the Regiment during his time, that will be greatly affected by this loss and he is very much a part of this Regiment’s history. He was 89 years of age.

As we learn of any details regarding possible funeral arrangements we will be conveying that in an email notification from the Association.

May he rest in peace.