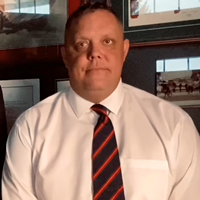 As this year comes to an end, it is with shock and sadness, I share the news that Tpr Sean Burton passed away on December 15th, 2022 at the age of 46. He was the son of Capt James Burton of Ridgeway, Ontario and Mrs. Barbara Caine (Michael) of Oakville, Ontario. He leaves behind his sister, Jennifer Sampson (Hank) of Peterborough, and his many friends spread throughout Canada who have expressed their grief over his passing.

Sean served in the Governor General’s Horse Guards from 1994 to 1995 and completed QL3. He was immensely proud of his time spent in the ranks and remembered his service in the military with fondness. While still in high school at Appleby College in Oakville, he drove many evenings, and in all kinds of weather, to attend parades and training.

Although his service was brief, Sean went as far as he could in all training phases and was especially proud to serve in a regiment where his father was a trustee and his grandfather, LCol G. Allan Burton was Honorary Lieutenant Colonel. A short video he made for the Regiment’s 200th Anniversary, was a clear statement of Horse Guard pride.

Sean also had a lengthy career in the film industry. He worked extremely hard to get where he was and had worked on many high profile and challenging shows. He was just starting to work as a gaffer, the highest position in his department and he was immensely proud of that.

On behalf of the Members of the Governor General’s Horse Guards Association, I wish to express our deepest condolences to Captain Burton and all of the Burton family at this time.

There will be a private family interment on January 7th, followed by a Memorial Service for all, at St. Jude’s Anglican Church in Oakville, at 3 pm on the same day.