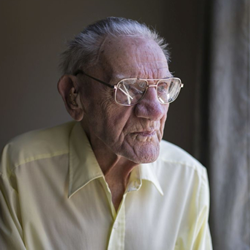 Again, we mourn the loss of another of our WW II Veterans.. Tpr. Harvey Brennan died on June 26 at the Riverside Place Long Term Care in Windsor, Ontario where he had resided. He was 97 years old. According to the nursing staff, he was in good spirits and doing great until the end and they were surprised at his passing which came peacefully as he slept. According to his grand-daughter Erin, Harvey was a man who lived life fully and on his own terms. Although his family has been unable to visit him since the end of February due to COVID-19 restrictions, he is fondly remembered for the fun and laughter he brought and the many jokes he told.

Following the War, Harvey’s life was taken up with raising a family, work and a move to Northern Ontario and after a hiatus of over seven decades, he was finally reunited with the Regiment last summer after we were contacted by Erin who shared a June 2019 article in the Windsor Star which featured Harvey and told of his experiences during the War. Although a trip to Windsor by the Association Executive to visit Harvey never materialized, he has been able to enjoy reading Regimental Lines and a copy of the regimental history book was also sent to him. The featured article in the Windsor Star can be found in the  Winter 2019 Edition of Regimental Lines.

On behalf of the Members of the Governor General’s Horse Guards  Association, I extend to Erin and all of the Brennan family, our heartfelt sympathies on the passing of Trooper Brennan and our gratitude for his service to Canada and the Regiment.