Since 2013, the memorial project has been dedicating memorials at the location of key battles that are marked by Regimental Battle Honours. The dedication of the memorials will continue over a number of years and has been broken into manageable parts in order to achieve key milestones.

With 2014 marking the 100 year anniversary of World War I (The Great War), the Project has an initial goal to place key memorials commemorating the efforts of the 4thCanadian Mounted Rifles and the 3rd Battalion (Toronto Regiment).

In 2019, we will mark the 75th year anniversary the Italian Campaign of World War II and the Project is seeking to place key memorials across Italy to mark this significant campaign for the Governor General’s Horse Guards. 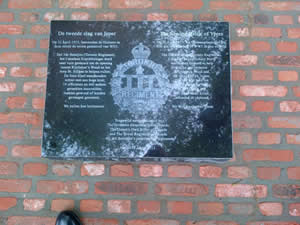 A project has various memorials designed that will be custom tailored to the historical significance of a site and recognizes key architectural or natural features of the surrounding area.  The memorials are being appropriately situated at a Battlefield or within a community to highlight the significance and historical meaning of the location and its relationship to the Regiment.  Each memorial will include a description of the battle or event that occurred and recognition of the Regiment’s contribution in that effort.

Where appropriate, combined memorials with other units are being undertaken.

The placement and maintenance of these memorials will be a coordinated and cooperative effort between private landowner, local municipalities and the Regiment.

In June 2014, the Governor General’s Horse Guards and the Queen’s Own Rifles dedicated a Memorial to commemorate the sacrifices of the 4th Canadian Mounted Rifles and the 3rd Battalion (Toronto Regiment) during the Battle of Passchendaele. For more information on the Passchendaele Memorial, please follow the link below:

In May 2016, the Governor General’s Horse Guards dedicated a Memorial to commemorate the sacrifices of the 4th Canadian Mounted Rifles and the 3rd Battalion (Toronto Regiment) during the Battles of Pozieres, Flers-Courcelette, and Ancre Heights, all part of the Somme Campaign. For more information on the Somme Memorials, please follow the link below:

In June 2016, the Governor General’s Horse Guards dedicated a Memorial to commemorate the sacrifices of the 4th Canadian Mounted Rifles and the 3rd Battalion (Toronto Regiment) during the Battle of Mt Sorrel. For more information on the Mt Sorrel Memorial, please follow the link below:

As part of the Governor General’s Horse Guards Memorial Project, the Regiment returned to Europe in 2016 to commemorate the 4th Canadian Mounted Rifles’ participation in World War I. The trip ran from May 28th to June 5th, 2016 in order to coincide with the 100 year anniversary of the Battle of Mount Sorrel. During the trip, the Regiment dedicated the Mount Sorrel Memorial and the Somme Memorial in addition to visiting all the historic WW1 regimental battle sites. The trip included over 60 participants from the Regimental Family & Friends and with the generous support of our sponsors, the GGHG Cavalry and Historical Society was able to funded over 35 members of the serving Regiment for this historic trip.