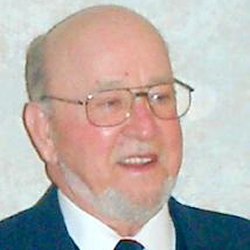 Cpl Gene Baycroft passed away peacefully at Nipissing Manor in Corbeil Ontario, on Thursday December 3rd, 2015 in his 92nd year. Gene was one of the youngest Horse Guards to have served in WW II, having lied about his age to go into battle.

His last appearance with the Regiment was in 2008 when he attended the Memorial Dinner and was the Veteran selected to read the Honour Roll. Sadly, in recent years, Gene suffered from Alzheimer’s and was moved to a home in North Bay to be close to his family.

He is survived by his children Bill Baycroft, Patty Wallace (Patrick) and Thomas Baycroft (Rhonda) and his sister Lorraine. A Service under the auspices of the Masonic Equity Lodge #659 Orillia was held at the Simcoe Funeral Home in Orillia on December 10, 2015 and Services under the auspices of the Royal Canadian Legion Branch 34 Orillia was held the following day in the funeral home.

On behalf of all Members of the Governor General’s Horse Guards Association, I offer belated condolences to the Baycroft family and Gene will be remembered for his service to the Regiment and to Canada.

As an expression of sympathy memorial donations may be made to the Alzheimer Society of Simcoe County and condolence are welcome at www.simcoefuneralhome.ca.